Get Treatment For Herniated Disc

Guide to Advanced Surgery for The Spine

The highly-skilled, well-trained spinal surgeons at Cedars-Sinai Marina del Rey Hospital will evaluate patients with a herniated disc and provide a personalized treatment plan. Several conservative and surgical treatment approaches are available, and the treatment that best suits the severity of your condition will be chosen.

What Is Herniated Disc?

A herniated disc is a painful condition in which your spinal disc has become displaced or damaged, resulting in leakage of the central jelly-like substance that, in turn, irritates the surrounding nerve roots. The condition is also commonly referred to as "slipped disc" or "ruptured disc." A herniated disc often causes pain in the neck, arms, lower back, and legs. Most people complaining of persistent back pain may also feel the pain radiating down their leg and foot, which is a clear indicator of a herniated lumbar spinal disc. Sometimes, a slipped disc may not give rise to any symptoms at all. When this occurs, the symptoms usually resolve themselves within six weeks.

Treatments and Drugs for Herniated Disc

A herniated disc requires surgical treatment when a disc fragment is dislodged and causes nerve impingement. The type of surgery is decided based on the severity and the exact location of the herniated disc. The two minimally invasive surgical options to treat a herniated disc include:


Both of these surgeries are done on an outpatient basis, meaning you can return home on the same day of the procedure.

Drugs and Other Treatment Needed for Herniated Disc

The types of herniated discs are categorized based on their location as follows:

Symptoms and Diagnosis of Herniated Disc 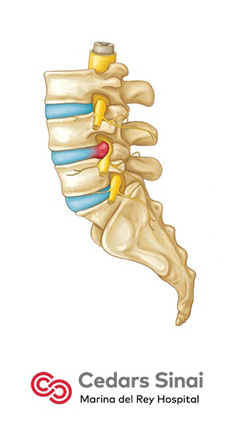 Generally, a herniated disc does not cause any pain or discomfort unless the disc portion impinges upon the spinal nerves.

The most common symptom of a herniated disc is low back pain, which is often described as a sudden, sharp pain that involves the buttocks and the back portion of one leg.

Commonly, the pain becomes worse at night, and while standing or walking for short distances.

This is associated with muscle weakness, numbness, tingling sensations in the arms and legs, and loss of control over urination and bowel movements.

A burning type of pain in the neck, shoulders, and arms may also occur.

Initially, a doctor will listen to a patient's symptoms and perform a careful physical examination, during which the exact source of the pain is detected. The examination usually involves evaluating the functions of a patient's nerve and muscle strength.

Imaging tests, such as X-rays, computed tomography (CT), and magnetic resonance imaging (MRI) scans may be ordered to visualize the defect in the bones, as well as the soft tissue associated with the spine.

The major risk factor that leads to a herniated disc is aging. However, this condition may occur in patients of any age. With advancing age, the spinal discs begin to lose water, wear out, and become thin and brittle. This leads to higher pressure within the disc, causing the outer shell to tear and the inner gelatinous matter to spill into the spinal canal. Other factors that lead to disc displacement include:

A herniated disc may occur as a result of strain to the lower back due to twisting or turning movements while trying to lift a large, heavy object. Excessive body weight combined with an inactive lifestyle may also contribute to the development of herniated discs. In addition, age-related degeneration of the discs may cause displacement of a spinal disc.

How to Prevent Herniated Disc

While it's impossible to avoid a herniated disc that results from age-related degeneration, there are a few preventive measures that can help keep the spine healthy and lower the risk of developing a herniated disc. These measures include:

Are you suffering from lower back pain? The specialty-trained spinal surgeons at Cedars-Sinai Marina del Rey Hospital can answer any questions, and provide information and guidance related to herniated disc treatment.

The Pros and Cons of Robotic-Assisted Spine Surgery

What Are the Most Common Spine Problems and How Can They Be Treated?