At Cedars-Sinai Marina del Rey Hospital we are providing you with the latest in minimally invasive treatment, changing the way you experience this certain procedure.

Our team of highly regarded specialists will use a new and sophisticated robotic platform in order to provide you with an excellent outcome – minimal scarring, less pain and the fastest recovery possible – for you to enjoy life again at its fullest.

Sacrocolpopexy is surgery performed to correct uterine prolapse. This condition occurs when the uterus, or womb, slips from its place in the abdomen and exits the body, either partially or fully, through the vagina. Prolapse can be caused by weakened muscles due to age or childbirth.

Often, uterine prolapse isn't symptomatic. When this is the case, doctors normally recommend monitoring the situation to make sure it doesn't get worse. If prolapse is not severe and is not affecting the life of the patient, surgical treatment is usually seen as unnecessary.

A healthy diet, avoiding standing for too long at one time, and weight loss may be among the recommendations your doctor has for you. Additionally, there are devices that can help support the uterus and don't require surgery.

However, sometimes, the prolapse is advanced enough that surgical intervention is seen as necessary.

What Are the Benefits of Minimally Invasive Sacrocolpopexy? 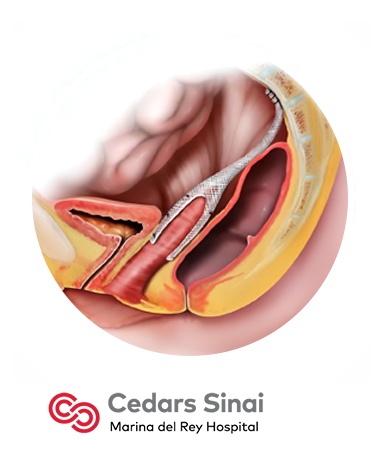 The main symptoms of uterine prolapse include a "pressure" feeling in your pelvis, pain in the lower back, the feeling that something is coming out of your vagina, pain during or after intercourse, difficulty urinating or defecating, and having trouble walking.

If you are diagnosed with uterine prolapse, then once you've recovered from sacrocolpopexy, these symptoms are likely to improve or even disappear.

With minimally invasive surgery, the biggest difference that the patient will notice is in recovery. A laparoscopic hysterectomy requires a few tiny incisions in comparison to a traditional abdominal sacrocolpopexy.

How Is Minimally Invasive Sacrocolpopexy Performed? 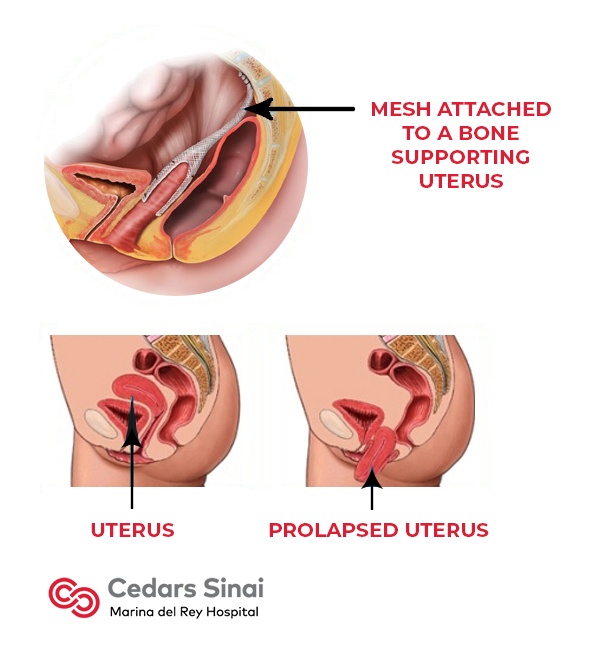 During uterine prolapse surgery, the surgeon implants a mesh support for the uterus, attached to a bone. With this suspension in place, the uterus returns to the space that it normally occupies, and ideally, it stays there.

This procedure was traditionally done through abdominal incisions, and in recent years, the possibility has arisen to perform this surgery with a minimally invasive method called laparoscopy.

In laparoscopy, the doctor does not make one large incision in the abdomen and look directly at his or her hands and the surgery site.

Rather, the doctor makes several very small incisions and inserts slim tools, including a scope hooked up to a monitor, through these incisions.

The surgery is performed with the doctor watching on the screen, which can provide a very detailed image from a good point of view.

Marina Women's Health’s surgeons have extended experience in operating with the Da Vinci® Surgical System. The key components of this system include:

Talk To Your Doctor About Sacrocolpopexy

If you're a Los Angeles-area resident experiencing pelvic prolapse of any kind, your gynecologist is the person to turn to for advice. If surgery is the recommendation, then we can help. Cedars-Sinai Marina del Rey Hospital serves patients from all over the Southern California region at our facility, located a block from the beach in Marina del Rey, near Los Angeles. Call us today at 844-MISI-4-YOU.

When can I resume my sexual activity following sacrocolpopexy?

It is our duty to instruct our patients before they are discharged. We will make sure you are fully aware of the aftercare instructions you should follow in the aftermath of this intervention.

What does the preoperative assessment for a sacrocolpopexy involve?

Your doctor will tell you what you should do before the surgery so that you will be fully prepared on the day of the intervention.

Are there any bathing interdictions after the sacrocolpopexy procedure?

Before you are discharged, you will get the necessary aftercare instructions that include your personal hygiene habits.