Get Treatment For Epidermal Cysts

At Cedars-Sinai Marina del Rey Hospital, our general surgeons are experienced in diagnosing and treating epidermal cysts. Our well-trained team of specialists provides patients with advice and guidance to make the best treatment choices.

What Are Epidermal Cysts?

Epidermal cysts are the most common type of abnormal cutaneous growth and although they can appear anywhere on the body, the most common areas affected are the scalp, face, neck, and trunk. An epidermal cyst is mostly filled with keratin that gets trapped under the skin due to skin trauma, sun exposure, HPV infection, or acne. An epidermal cyst is usually tan or yellow in color and its size ranges from a quarter of an inch to 2 inches in diameter. These cysts are more frequently found in men than in women and in people between 20 and 30 years old.

Epidermal cysts are generally characterized as growing slowly and being painless, rarely causing severe problems that would require special treatment. However, these cysts are frequently removed, especially when they appear in exposed places and look unattractive or when they cause discomfort. These growths are almost always benign and are only associated with malignancy in rare cases.

Epidermal cysts have been known by many names over the years such as epithelial cysts, epidermoid cysts, keratin cysts, or epidermal inclusion cysts. Additionally, people sometimes refer to these cysts as sebaceous cysts, which is incorrect because this term implies that the cyst is of sebaceous origin.

In most cases, epidermal cysts do not require surgical treatment because they are benign growths. However, minor surgery might be recommended if the cyst becomes unattractive or uncomfortable for the patient. The procedure required to remove an epidermal cyst is a two-step process called a minimal excision. First, a small cut is made through the skin on the cyst and is followed by the administration of a local anesthetic. Second, the cyst is removed. The surgeon will squeeze out its contents and pull out its walls. This procedure is minimally invasive, requiring such a small incision that oftentimes the patient does not need sutures and is able to return to his or her daily activities immediately. The patient may be prescribed antibiotics after the removal of an epidermal cyst to prevent infection.

Drugs and Other Treatments Needed for Epidermal Cysts

Epidermal cysts are generally harmless growths that do not require any treatments. However, if the patient feels that the cyst is uncomfortable, they can discuss it with a doctor and find the most appropriate solution. Some of the most common treatment options available for epidermal cysts are: 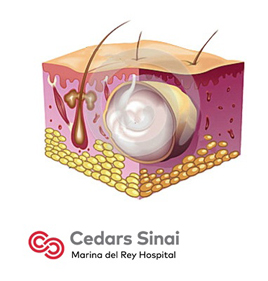 The most common symptoms of epidermal cysts are:

Doctors are generally able to diagnose an epidermal cyst just by examining it. Alternatively, your doctor may decide to perform a biopsy in which a few skin cells will be collected to send to a laboratory in order to rule out other conditions.

There are certain risk factors that increase a person’s chances of developing epidermal cysts, such as:

The main cause of developing epidermal cysts is abnormal cell growth that results from hair follicle damage and oil gland malfunctions. These phenomena trigger a buildup of keratin underneath the surface of the skin, thus leading to the formation of epidermal cysts.

It is important to keep in mind that people who are suffering from epidermal cysts are strongly recommended to seek medical attention before choosing a treatment option. However, there are some alternative treatments that may be beneficial. Although these alternative treatments have not been scientifically tested or confirmed they may be useful to some:

How to Prevent Epidermal Cysts

Although epidermal cysts cannot be prevented, it is recommended that you ask for your doctor's advice every time you notice any abnormal growths underneath the skin.

Are you suffering from epidermal cysts? For any questions, information, or guidance related to epidermal cysts treatment, get in touch with our specialty-trained, skilled general surgeons at Cedars-Sinai Marina del Rey Hospital.

Request an Appointment
For Referring Physicians
For Medical Professionals