Get Treatment For Inflammatory Bowel Disease

At Marina del Rey Hospital, our gastroenterologists are well trained in diagnosing and treating a wide range of conditions such as Inflammatory Bowel Disease (IBD), namely Crohn's disease, and ulcerative colitis. After carefully evaluating your condition, our specialists will recommend a comprehensive treatment plan that best suits your needs.

What Is Inflammatory Bowel Disease?

Inflammatory Bowel Disease, or IBD, includes conditions that generate a chronic or repetitive immune system reaction that results in the inflammation of either the whole digestive tract or portions of it.

The two main conditions that are cataloged under IBD are Crohn’s disease and ulcerative colitis, both of which present a number of symptoms such as diarrhea, lethargy, pain, and weight loss, and can be serious. What exactly causes these conditions is not yet known. As a result, prevention and treatment can sometimes be difficult. Specialists suggest that these diseases are more frequent in developed countries, due unhealthy lifestyles and exposure to pollution. Inflammatory bowel diseases currently affect more than 1 million people in the United States alone and is most common for people of Caucasian and Ashkenazi Jewish descent.

IBDs, namely Crohn’s disease and ulcerative colitis, can be treated by using a wide range of treatments. However, it is not uncommon for these conditions to require surgery if the patient is not responding well to medication or when the symptoms become extremely severe. If the patient's condition requires surgery, the doctor will take into consideration a series of factors such as the location of the disease in the digestive tract, the symptoms, complications, and severity of the disease.

Drugs and Other Treatments Needed for Inflammatory Bowel Disease

The most important thing when treating inflammatory bowel diseases and their symptoms, is to find the treatment that most effectively reduces inflammation in the digestive tract. If inflammation is reduced, the symptoms generated by the disease can disappear and the disease itself can become remissive. However, since this disorder cannot be cured, patients must use medications or surgery to keep symptoms under control. When treating IBD with medications, gastroenterologists take one of two approaches: First, the “top down” approach, which consists of the administration of stronger medications first, or second, and the “step-up” approach, which consists of treating the patients with milder medications first. Some of the most common medications used to treat inflammatory bowel diseases are:

There are several different types of inflammatory bowel disease, but the most common ones are ulcerative colitis and Crohn’s disease, which also have several subtypes, depending on where the condition is located. 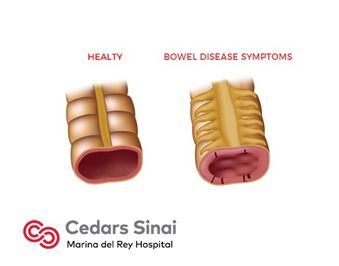 Inflammatory bowel disease can cause a wide range of symptoms, which may vary based on the location of the inflammation and its severity. Additionally, the intensity of the symptoms associated with IBD can vary from mild to severe, generating episodes of intense illness, followed by periods of amelioration.

Some of the most common symptoms associated with inflammatory bowel diseases, namely Crohn’s disease and ulcerative colitis are:

Some of the most important risk factors for inflammatory bowel diseases are:

The exact cause of inflammatory bowel disease is not clear yet, but specialists suspect that one of the causes might be a malfunction of the immune system. Another possible cause may be genetics, as it has been demonstrated that people whose family members are suffering from IBDs are very likely to develop these conditions as well. Diet and stress were previously believed to be the main causes for IBDs, but recent studies have shown that these factors do not cause them, but only aggravate existing IBD.

Because there is no permanent cure for inflammatory bowel diseases, people tend to try a wide range of treatments, including alternative ones. However, IBD is serious and it is strongly recommended that patients discuss their treatment options with their doctor first. Some of the most popular alternative treatments for IBD:

How to Prevent Inflammatory Bowel Disease

IBD can sometimes occur due to hereditary factors and thus is impossible to prevent. However, certain cases of IBD or relapse can be prevented by making a series of lifestyle improvements such as: quitting smoking, eating a balanced diet, avoiding fats and processed foods, avoiding polluted cities, and regular exercise.

Are you suffering from inflammatory bowel disease? For any questions, information or guidance related to IBD treatments, get in touch with our specialty-trained, skilled gastroenterologists at Marina del Rey Hospital.