Get Treatment For Type II Diabetes

Our highly-skilled and experienced bariatric surgeons carefully evaluate every patient to successfully resolve obesity-related conditions such as type II diabetes. Weight loss keeps type II diabetes under control better than any other treatment option. Whether it is achieved through bariatric surgery or lifestyle and behavioral changes, losing fat helps one lead a healthy and longer life. Our dedicated team of surgeons at Cedars-Sinai Marina del Rey Hospital ensures the best care for their patients throughout the course of treatment, during the recovery period, and through post-recovery.

What Is Type II Diabetes?

Type II diabetes, once known as adult-onset diabetes, is the most common type of diabetes, making up for about 95% of patients with the disease. Type II diabetes most often develops in middle-aged and older people who are overweight or obese due to an inactive lifestyle. This type of diabetes is more likely to develop at a younger age because of higher incidences of childhood and adolescent obesity. Genetic susceptibility and environmental factors can also trigger the development of type II diabetes. Studies show that the TCF7L2 gene and its variants make a person more susceptible to type II diabetes.

Type II diabetes begins when the body develops resistance to the effects of the insulin hormone produced in the pancreas. This condition is called insulin resistance, which is also linked to excess weight and inefficient use of insulin in the body’s muscles, fat, and liver cells. As a result, the body demands more insulin to speed up the entry of glucose into the cells. Initially, the pancreas will meet this demand by making more insulin, but as time passes, beta cell dysfunction may reduce its capacity to produce sufficient insulin, leading to elevated levels of glucose in the blood (prediabetes or diabetes).

As the symptoms of type II diabetes are subtle and appear slowly, the disease can go undetected for several years. Type II diabetes is a progressive condition that requires strict lifestyle modifications.

Obesity and an inactive lifestyle are major contributors to the development of type II diabetes. For people with genetic susceptibility, these two risk factors greatly increase the likelihood of type II diabetes. Obesity, in particular central obesity (abdominal fat deposition), can lead to a condition called insulin resistance that is common in patients with type II diabetes.

The Interrelationship Between Obesity and Type II Diabetes

Obesity and type II diabetes are interlinked disorders. The severity of type II diabetes varies depending on the patient's body mass index (BMI). Obese people are at a sevenfold higher risk of developing diabetes; overweight individuals are at a threefold higher risk. Apart from the body weight, the location of excessive deposits of fat in the body significantly increases a person's risk of type II diabetes. Being overweight hinders proper production and utilization of the insulin hormone. Obesity and lack of physical exercise can make insulin resistance even worse. As the incidence of obesity and diabetes is rising at an epidemic rate, obesity-dependent diabetes has been described with the new term "diabesity."

This surgical procedure makes an alteration in the gastrointestinal tract so that the food bypasses most parts of the stomach and the upper segment of the small intestine. After this surgery, diabetes remission can occur before the patient loses a significant amount of weight. It resolves type II diabetes in about 80% of patients and improves the condition in 15% of the patients.

This procedure, also called vertical gastrectomy, involves the removal of a very large portion of the stomach. This causes weight loss, as the remaining portion of the stomach becomes very narrow and is unable to hold large amounts of food. This surgery also causes alterations in gut hormones that facilitate the improvement of diabetes.

This procedure involves the placement of a band in the upper part of the stomach. Only after a significant amount of weight loss can remission of diabetes potentially occur. Diabetes resolves in about 45-60% of patients who undergo gastric banding.

This surgery is rarely performed, as it is more complex and puts patients at a higher risk of developing complications. But when performed, it induces fast and sustained remission of type II diabetes.

Drugs and Other Treatment Used for Type II Diabetes

Weight loss is key to achieving remission of type II diabetes in overweight or obese individuals. For this reason, lifestyle modification programs that include diet, exercise, and behavioral changes may be suggested. Moderate weight loss (about 5-10% of body weight) that sustains for a long-term improves insulin action and reduces fasting blood sugar levels. Pharmacotherapy consisting of different medications to treat diabetes may also be recommended.

Other Types Of Diabetes » 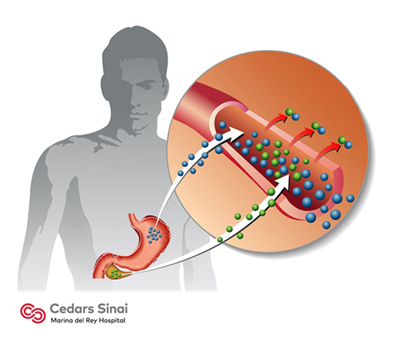 Most people with type II diabetes have no signs and symptoms at all, or the symptoms are so mild that they remain unnoticed until serious problems, such as blurred vision or heart disease arise.

Some of the symptoms of type II diabetes include:

A doctor may run blood tests to diagnose type II diabetes, as there will be no symptoms in the early stages of the disease. These tests include:

The random plasma glucose (RPG) test is used to check for diabetes during regular health checkups.

The A1C test detects type II diabetes and prediabetes. This blood test measures a person’s average blood glucose level over a period of three months. This test can be done at any time of the day and does not require a patient to fast. The result of this test is expressed in percentage. A normal value should be below 5.7%. The higher the value, the higher a patient's blood glucose level.

Type II diabetes is a condition caused by a progressive decrease in insulin secretion over a period of time due to the damage that occurs to the beta cells of the pancreas responsible for making insulin. Research suggests that there is a genetic interlink between diabetes and obesity that is found on chromosome 6, which leads to the recognition of an inhibitor of insulin receptor called ENPP1.

Obesity can lead to the development of type II diabetes by triggering changes in the body’s metabolism, which causes fat cells to release large amounts of fatty acids, hormones, glycerol, pro-inflammatory cytokines, and other substances that make the body less sensitive to insulin. These substances act by interfering with the function of insulin-responsive cells and their ability to react to insulin. Thus, insulin resistance, when combined with malfunctioning pancreatic beta cells, results in a failure to maintain normal blood glucose levels.

A variety of alternative therapies and supplements have shown promising results in reducing blood sugar levels. It is important to consult your doctor before using any dietary supplements, as these can have adverse reactions with diabetes medications. Natural supplements cannot be used in place of standard diabetes treatment. Always consult your doctor before starting any alternative therapy regimen.

Acupuncture is a treatment method in which very thin needles are inserted into specific pressure points on the body. Researchers believe that acupuncture triggers the release of natural painkillers and helps reduce the painful symptoms of neuropathy (damage to the nerves resulting from diabetes). Acupuncture treatment can also offer relief from chronic pain.

Some of the nutritional supplements used to regulate blood glucose levels include chromium, vitamin B1, alpha-lipoic acid, and magnesium. There is no sufficient amount of scientific evidence to support the use of dietary supplements in the management of type II diabetes.

How to Prevent Type II Diabetes

Being active, reducing the intake of fat, and losing excess weight can lower your risk of developing type II diabetes.

If you are overweight or obese, take the following steps:

If you lead a sedentary lifestyle:

If you have high blood pressure:

If you have high cholesterol or triglyceride levels:

Are you obese and concerned about diabetes? The bariatric surgeons at Marina Weight Loss can answer questions, discuss weight loss procedures, and help you find the most appropriate treatment solutions for your condition.

What Happens at a Bariatric Support Group Meeting?

How to Correct Overeating After Gastric Bypass

Medications to Avoid with Lap Band

What Vegetables to Eat after Gastric Bypass and other WLS

What Beverages Should You Avoid after Lap-Band Surgery?

Protein, a Priority After Bariatric Surgery

What Do I Do if Food Gets Stuck in My Lap-Band?

What Is the Average Weight Loss after Gastric Sleeve?

What Is the Oldest Age You Can Have Lap-Band Surgery?

Which Is the Safest Bariatric Procedure?

What Should a Lap-Band Patient Eat Long Term?

Will I Be Able to Get Pregnant After Gastric Sleeve Surgery?

Will My Hair Fall Out After Gastric Bypass Surgery?

Are There Any Foods I Can't Eat with the Lap-Band?

Who Is a Good Candidate for Gastric Sleeve Surgery?

What Are the Reasons Weight Loss Surgery Fails?

Is My Lap-Band Too Tight?

How Long Will I Be Out of Work after Lap-Band Surgery?

How To Decide Between Gastric Bypass and Lap-Band Surgery

Can You Gain Weight Back after Gastric Bypass Surgery?

How Many Follow-up Visits Will I Need after Lap-Band Surgery?

Do I Need to Lose Weight Before Weight Loss Surgery?

What Can I Expect after Gastric Sleeve Surgery?

How Do I Talk to My Doctor about Gastric Bypass?

How to Tell People You've Had Weight Loss Surgery

What Diet Is Recommended After Gastric Bypass Surgery?

Revisional Weight Loss Surgery: What Is It and Why Would I Need It After Bariatric Surgery?

What Is the Safest Bariatric Procedure?

What Are the Health Complications of Weight Loss Surgery?

What Is the Cost of Bariatric Surgery?

Obese Individuals Are at Greater Risk for Severe COVID-19 Infection