Guide to Advanced Surgery for Prostatectomy


As a leading health center, Cedars-Sinai Marina del Rey Hospital is committed to treating prostate-related conditions by having gathered the best team of urologists with vast experience in modern medical technology and techniques.

If a prostatectomy is required in order for you to live a healthy life, at Cedars-Sinai Marina del Rey Hospital you will receive the treatment adapted to your needs through minimally invasive procedures guaranteeing the fastest healing process possible.

A radical prostatectomy is when a surgeon takes out the prostate gland and some surrounding tissue, usually in order to get rid of prostate cancer. It is one of several ways to treat prostate cancer, along with radiation, chemotherapy (medicine that essentially poisons cancer cells), cryotherapy (freezing cancerous tissue and removing it), and others.

According to the American Cancer Society, prostate cancer is the second-most common cancer in men in Los Angeles and America — only skin cancer has more male victims.

Furthermore, according to the Society, so many men get prostate cancer that even though most patients do not die of it, it still has the second-highest death toll of cancers in men. Radical prostatectomy can eliminate prostate cancer in men whose cancer is limited to the prostate.

What Are the Benefits of Minimally Invasive Prostatectomy? 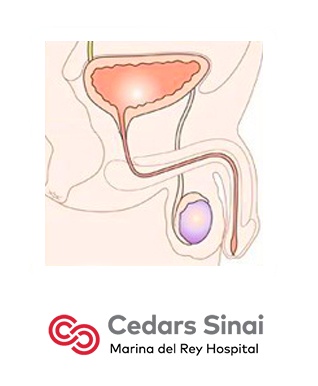 With the advent of laparoscopy, surgeons are able to remove the prostate through very small incisions, watching on a monitor with the help of a small camera.

How Is Robotic Prostatectomy Performed?

The surgeon sits at a console and uses an ergonomically designed set of controls to move four robot arms, at the ends of which are mounted the instruments for surgery. The console’s “brain” interprets the surgeon’s movements, performs the needed incisions with perfect fluidity and accuracy.

Cedars-Sinai Marina del Rey Hospital surgeons have extended experience in operating with the Da Vinci® Surgical System. The key components of this system include: