Get Treatment For Prostate Cancer

Our oncologists and urologists work together in order to evaluate patients with prostate cancer and advise a treatment plan that is most appropriate to the patient's health condition. Our urology surgeons are highly skilled in performing complex urological surgeries. Several treatment options - both conservative and surgical treatments are available. The option that best suits your individual needs will be considered.

What Is Prostate Cancer?

The prostate is a gland belonging to the male reproductive system that lies just below the bladder and in front of the rectum. Prostate cancer is a slowly developing disease in which abnormal cells start developing and multiplying in an uncontrollable manner in the tissues of the prostate. Prostate cancer occurs in about 1 in 5 men and is the second most common cancer after skin cancer in the US. It is the second leading cause of death because of cancer in men.

In this technique, smaller incisions are made and long surgical instruments are used to excise and remove the prostate gland. In a laparoscopic radical prostatectomy (LRP), your surgeon will make several tiny incisions through which special long surgical tools are passed to remove the prostate gland. One of these tools is fitted with a tiny video camera, which allows your surgeon to visualize the internal organs in your abdomen.

The benefits of laparoscopic prostatectomy include:

This approach is also called the robotic prostatectomy. In this procedure, a robotic interface or the da Vinci system is used to perform the surgery. Your surgeon sits at a surgical console and uses robotic arms to operate through the tiny incisions made in your abdomen. The robotic surgical system improves the precision and helps your surgeon to make accurate movements with the instruments. The robotic surgical approach has several advantages such as less pain and blood loss, and faster recovery.

Drugs and Other Treatment Needed for Prostate Cancer

Chemotherapy and/or radiation therapy are advised prior to surgery to shrink the tumor so that it becomes easier to remove during the surgery. This treatment is called neoadjuvant therapy. Chemotherapy or radiation therapy that is given after the surgery destroys the remaining cancer cells and reduces your risk of cancer recurrence. This treatment is called adjuvant therapy.

The characteristic features of the four stages of prostate cancer are described below: 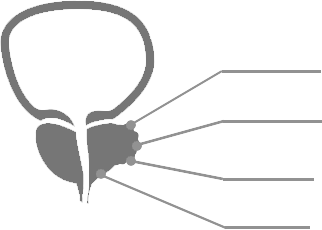 The major symptoms of prostate cancer are frequent urge to urinate and an interrupted or weak flow of urine.

Other signs and symptoms include:

Several risk factors have been found to affect a man’s risk of developing prostate cancer. The factors include:

The exact cause of prostate cancer is unclear, but there are some risk factors that influence the cells of the prostate gland to become cancerous. Basically, changes in the DNA of a prostate cell lead to the development of prostate cancer. The DNA changes or mutations that cause the activation of tumor suppressor genes (genes that cause cell death) and deactivation of oncogenes (genes that help the cell to grow and stay alive) can cause the uncontrollable growth of cancer cells. These changes in the DNA are either inherited or acquired during the lifetime of a person.

How to Prevent Prostate Cancer

The preventive actions that help in reducing your risk of developing prostate cancer include:

For any questions, information, or guidance related to prostate cancer, consult our specialty-trained urologists at Cedars-Sinai Marina Del Rey Hospital.

Request an Appointment
For Referring Physicians
For Medical Professionals