Get Treatment For Arm & Leg Fractures

The highly specialized doctors at Cedars-Sinai Marina del Rey Hospital will evaluate your leg or arm fracture and provide an individualized treatment based on your needs. Our specialists will help you choose the most appropriate treatment for your condition from the various conservative and surgical options available. To determine the most appropriate procedure, they will carefully consider all your symptoms and the severity of your arm or leg injury.

An arm or leg fracture is a break in one of the bones of the arms or legs. Bone fractures are also called bone cracks or broken bones. Fractures occur when the bones are not able to resist the force applied to them.

Arm and leg fractures are painful for different reasons:

Leg fractures involve a break in one of the three bones of the leg:

Also called the thigh bone, the femur is the longest and strongest bone in the body. It is the only bone in the thigh and it is going from the hip to the knee. The femur's role is to bear all the body's weight while moving or standing and maintain mobility. The hip and thigh muscles act upon the femur in order to produce the leg's movement.

The fibula is situated in the outer half of the lower part of the leg. It is a long and thin bone located next to the tibia. The fibula stabilizes the ankle.

The tibia is also situated in the lower leg. It is the bone that bears the weight, therefore it is much larger than the fibula.

An arm fracture may occur in one of the three bones of the arm:

The humerus is forming the upper arm, it is the bone that goes from the shoulder to the elbow. The humerus functions as an attachment for muscles and ligaments, thus enabling different shoulder and elbow joint movements.

The radius is situated in the forearm, it's parallel to the ulna. This long bone produces movement by pivoting around the ulna.

The ulna is a long bone situated in the forearm, parallel to the radius. This bone functions as a stabilizer for the radius that's pivoting to produce movement.

There are several ways of treating arm and leg fractures:

Through cast immobilization, the broken limb is wrapped around a material until the fracture heals. The cast can have different shapes and sizes and it is usually made of fiberglass or plaster. Fractures managed through this method must be properly aligned to ensure a fast and efficient recovery. If the alignment is not properly done, the fracture will require additional treatment.

If the doctor decides to proceed with a surgical reduction, the patient will receive anesthesia, local, or general. Then, the specialist will perform certain maneuvers in order to realign the broken bones and then apply a cast or splint to hold the bones together.

Traction is an old method of managing bone fractures which is no longer common. Nonetheless, there are cases when it can be extremely useful. In traction, the bones are gently pulled in order to align them. Frequently, the doctor also uses a pin on the side of the fracture and attaches it to weights and ropes in order to align the bone fragments, performing what is known as skeletal traction.

Another type of traction is called skin traction and it functions similarly. However, in this case, a pin is no longer necessary because the traction is performed by pulling the extremities externally.

Recovery after Arm and Leg Fractures

Following an arm or leg fracture, the patient will get pain relievers and the necessary instructions on how to take the medicine. The pills will decrease the pain and the swelling and prevent fever. However, pain medicine may have side effects and cause kidney or stomach problems in some patients. This is why it's necessary to talk to your doctor about any conditions you suffer from or any other ongoing treatment especially if you're taking blood thinners.

After the cast or splint has been removed, the patient will most likely require physical therapy or exercises. The rehabilitation program will help the fractured limb regain its mobility. Because of the fracture, the arm or leg wasn't moved for a long time, so there is a feeling of stiffness and the muscles have lost their strength in the affected area. Depending on the injury's severity, the rehabilitation process can take up to several months or even more.

Types of Arm and Leg Fractures

There are different ways of describing a fracture according to the sort of trauma or force that was inflicted upon the bone. Other factors that play an important role in classifying fractures are:

Thus, there are open and closed fractures according to how the skin looks;

According to the fracture line, there are:

Symptoms of Arm and Leg Fractures 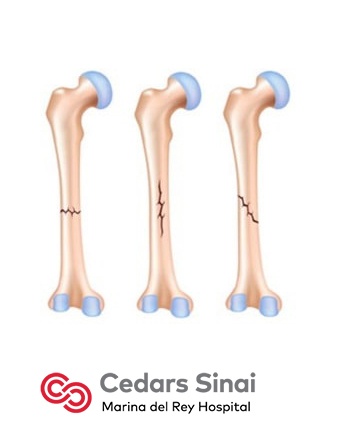 When a person suffers an arm or leg fracture, he or she will typically have some of the following symptoms:

Diagnosis of Arm and Leg Fractures

The doctor will examine your arm or leg to determine whether you have suffered a bone fracture. You will have to tell your doctor how the injury occurred. Other important information you will be required to provide is your medical history. The doctor will need to know if you have had other arm or leg fractures in the past, any injuries that caused skin break, and how much time has passed since your last tetanus immunization. The doctor will have to touch the affected limb to evaluate your sensory capacity. He or she will gently press areas of your arm/leg, check your limb's mobility and your pulse. A bone fracture might also lead to blood vessel damage. This initial examination will allow the doctor to establish if your blood vessels have also been affected by the injury. If there are any open wounds in your skin, your doctor needs to examine them.

Some of the tests that are necessary in order to diagnose a fracture are CT scans, MRI, x-rays, and ultrasound tests. These images will show whether the bones are intact or they have suffered damages.

Arm and leg fractures are commonly caused by injuries. Some of the most frequent circumstances that lead to these fractures are car collisions and sports accidents.

From a medical standpoint, there are 3 factors that can cause arm and leg fractures:

Moreover, there are multiple factors that influence bone health and increase the chance of suffering fractures:

Gender: women are generally more prone to suffer fractures than men. The explanation is that women's bones are less dense and significantly smaller than men's. One in two women aged 50 or over will probably suffer from a fracture. Women usually report fractures after the onset of menopause when the levels of estrogen decrease and lead to bone loss.

Smoking: smoking has an impact on the body’s hormones and is correlated with poor bone density. Though it's hard to indicate how much smoking influences bone health, because this habit is often correlated with other risk factors, it's generally believed that smokers are more prone to fractures.

Alcohol consumption: excessive alcohol consumption can increase fracture risk because it affects the bones' density and structure. These effects are correlated with heavy drinking in a person's youth. Even if the person stops drinking later in life, the bone's health might still be compromised.

Chronic diseases: people with chronic diseases such as diabetes, celiac disease, inflammatory bowel disease, Crohn's disorder, or ulcerative colitis present a higher risk of bone fractures. The explanation is that these conditions affect the gastrointestinal tract which is no longer able to absorb the calcium that is so important to the bone's density and growth.

Rheumatoid arthritis: this autoimmune condition which is more common in women than in men is also associated with fractures because the bones are attacked by the disease. The effects of arthritis are bone loss and severe joint damage which increase the risk of fractures.

Osteoporosis: this condition is typically seen in female patients and it is associated with brittle bones. Due to this condition, the bones become weak and they are more likely to break.

Previous fractures: patients who have suffered from low impact fractures in the past are twice as likely to have another fracture in the future.

Steroid treatments: steroids can be prescribed as a treatment for chronic inflammatory conditions. Unfortunately, in high doses, they can lead to bone loss and fractures. This is due to the fact that steroids reduce calcium absorption in the gastrointestinal tract and favor its loss through urine.

Low BMI: people with a low body mass index (below 19) are believed to have a higher risk of bone fractures because their bones are smaller and thinner. Moreover, they have less body fat which is useful because it protects the bones from damage during accidents.

Eating disorders: anorexia can increase the risk of arm and leg fractures due to the low intake of nutrients which leads to insufficient calcium.

Some alternative treatments have proven useful in helping patients with fractures heal faster.

Vitamin D refers to a range of vitamins including vitamins D1, D2, and D3. These vitamins support cell growth which plays an important role in helping the bone heal faster. Vitamin D also supports calcium absorption and it is synthesized by the skin through sun exposure. It can also be taken as a supplement and it is found in oily fish, eggs, liver, and fortified milk.

Calcium is a mineral that supports various organs and functions. It is beneficial for the heart, the nervous systems, the muscles, the teeth, and the bones which are why it's recommended after a fracture. Calcium can be taken as a supplement and it is also found in milk, dairy products, and green vegetables.

Probiotics are good bacteria that naturally occur in the human body, mainly in the digestive system. Probiotics are essential for the body to be able to combat the bad bacteria and correlated infections. Probiotics are usually taken as supplements and they can also be found in yogurt.

How to Prevent Arm and Leg Fractures?

Since most fractures occur during accidents, it's recommended to always use the necessary safety equipment when you're driving or engaging in sports activities.

A balanced and varied diet containing sufficient calcium and vitamin D will support the bones' strength. Calcium is the key ingredient for healthy bones and vitamin D is essential in the absorption of calcium. Normally, all the nutrients necessary for strong healthy bones can be found in a balanced diet that contains:

Regular exercising is useful in strengthening the bones especially if the patient practices sport during youth because it reduces the risk of bone loss later in life.

Don't forget that exposure to sunlight is essential in getting sufficient amounts of vitamin D. Whenever possible, try to spend time outside especially during sunny days.

Women aged 65 and older should get screened for osteoporosis. Early detection enables the patient to start the treatment earlier and reduce the risk of fractures. Patients with osteoporosis are advised to take calcium supplements and sometimes estrogen replacement therapy.

Which Is Better - PRP Injection or Knee Replacement Surgery?