Get Treatment For Uterine Polyps

The highly specialized and well trained gynecological surgeons at Cedars-Sinai Marina del Rey Hospital review patients with uterine polyps and advise an individualized treatment plan for each patient. The patients can choose from a number of non-surgical and surgical treatment options available. The treatment that is best for the symptoms and severity of uterine polyp will be considered.

What Is a Uterine Polyp?

A uterine polyp is an abnormal overgrowth that is found on the outermost endometrial layer of the uterus. It is also called an endometrial polyp. Uterine polyp ranges in size from small mustard to that of a golf ball. In most cases, these polyps have no cancerous cells and may fade away or detach themselves and come out through the vagina after some time. On rare occasions, they can become cancerous. These uterine polyps are usually attached through a stalk-like structure protruding from the endometrial lining. This disorder is more often seen in women who are experiencing menopause or who have past their menopause. There are very few chances of young women having uterine polyps.

There are many options available for treating uterine polyps. The choice of these treatments depends on the severity, the size of the polyp, number of polyps, the age of the patient, side effects, and her reproductive plans for the future.

Polyps that are unresolved through medications are removed surgically. Anesthesia is used to avoid discomfort, and this procedure is generally an outpatient procedure and will not require hospitalization.

Dilation & Curettage: In this procedure, the entire uterine lining is scraped blindly expecting to have removed all the polyps. This procedure may cause unnecessary damage to the uterus by scraping off even the healthy part of the uterus and creating scar tissue.

Hysteroscope excision: Hysteroscope is a small telescopic instrument, which is inserted through the vagina and cervix into the uterus to view polyps on a video monitor. With the help of surgical instruments, the polyps are removed. This is the most commonly used approach.

Drugs and Other Treatment Needed for Uterine Polyps

Wait and watch: Polyps without symptoms of uterine cancer are smaller in size will resolve gradually by themselves. In such cases, treatment is not necessary as long as the polyps are non-cancerous.

Non-surgical treatment of uterine polyps is given using hormonal drugs, which change the hormonal levels in the body. They are given orally, in the form of injections, or through an intrauterine device.

Based on the size and growth of the endometrium layer, the doctor may advise the following medications.

However, if the symptoms appear again after stopping the medication, the doctor may advise surgical treatment. 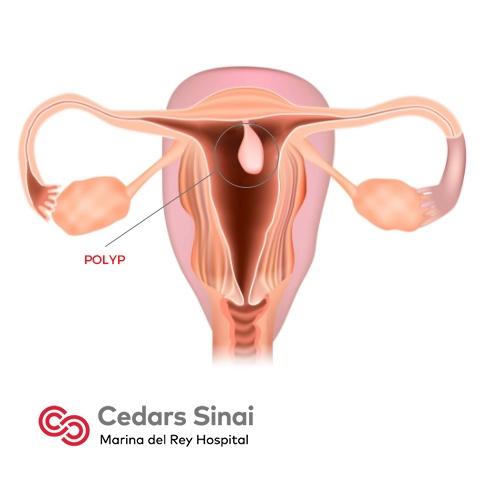 The doctor may perform any of the following tests to confirm the presence of uterine polyps.

Transvaginal ultrasound: An ultrasound device, which generates sound waves and creates an image of the uterus, is inserted through the vagina. The uterine polyp may be identified in the form of a thickened endometrial tissue.

Hysterosonography or Sonohysterography: This is an allied procedure followed after performing the transvaginal ultrasound. In this procedure, saline solution is injected into the uterus through a small tube called a catheter. Due to the introduction of the fluid, the uterus expands. This enables the doctor to obtain a clearer view of the uterine cavity and easily differentiate any growths.

Hysteroscopy: The doctor inserts a thin, flexible, and lighted telescope called a hysteroscope through the vagina and cervix into the uterus. Hysteroscopy enables the doctor to examine the internal portion of the uterus.

Biopsy: The doctor uses a suction catheter, a small plastic instrument inside the uterus, and collects a sample that is sent for testing to the lab.

Curettage: This procedure is done to identify as well as treat the polyps. An instrument called a curette is inserted into the uterus. With this instrument, the doctor scrapes the tissue or removes the polyps. The removed tissue or polyps are sent to a laboratory for further testing to find out if any cancerous cells are present.

The causes of the formation of uterine polyps are not clearly identified. However, the change in hormonal levels is found to be one of the factors. These uterine polyps are estrogen-sensitive. Hence, the circulating estrogen is a critical cause for the thickening of the endometrium and growth of the uterine polyps.

Herbal medicines are also used in the treatment of uterine polyps. Some of the best herbs used in the treatment of this condition include cayenne pepper, goldenseal, Xanthium, green tea, garlic, angelica, flax plant, red raspberry leaf, marshmallow, and bayberry. Take a health care professional’s advice and consent before taking up such herbal remedies.

How to Prevent Uterine Polyps

There is no known preventive method to avoid the development of uterine polyps. However, by undergoing regular gynecology check-ups, suitable treatment can be started immediately if polyps are detected.

In addition, the following measures are recommended, which might be of use in controlling the thickening of the endometrium and growth of the uterine polyps.

Diet: Consumption of meat and alcohol should be within the limits. Alternatively, more vegetables, fruits, milk with less fat, food rich in vitamin D, may be added to your diet. Regular consumption of green tea is also beneficial.

Are you suffering from heavy menstrual bleeding, irregular periods, or pelvic discomfort? For any questions, information, or guidance related to uterine polyps, consult our specialty-trained, skilled gynecologists at Cedars-Sinai Marina del Rey Hospital.