Get Treatment For Endometriosis

Endometrial tissues under normal conditions shed every month during menstruation. Endometriosis is a painful medical condition in which the tissue that lines the inner side of the uterus called the endometrium grows outside the uterine cavity. This condition is also called an endometrial implant. Endometriosis is often associated with the ovaries, the uterine surface, the fallopian tubes, the bowel, or the tissue lining the pelvic cavity. The hormonal changes that occur during the menstrual cycle affect the endometrial tissue that is misplaced, resulting in growth, thickening, and breaking down of these tissues. The broken tissues are unable to move anywhere and eventually get trapped in the pelvic region. When endometriosis is associated with the ovaries, cysts called endometriomas develop. The tissues surrounding these cysts get irritated, develop scar tissues, and abnormally bind to other organs.

Endometriosis can cause severe pain especially during the menstrual cycle, and also, be a reason for infertility in women.

Based on the severity of the symptoms of endometriosis and the preference of the patient, the doctor will suggest the appropriate type of treatment.

When medicines and other conservative treatments do not yield a good result, minimally-invasive surgery is considered, especially if the patient wants to conceive a child or if there is severe pain. The main intention of minimally-invasive surgery is to remove or destroy endometrial growth without damaging the reproductive organs. Laparoscopic surgery is more widely considered since it improves the chances of pregnancy and reduces pain. In this procedure, one or two small incisions are made in the abdomen, which allows the introduction of instruments required to destroy or remove endometrial tissues. At the end of the operation, the small cuts are closed using a stitch, surgical tape, or glue. The stitches either dissolve or can be removed after a few days. Patients who undergo laparoscopic surgery often have a quick and less painful recovery.

Surgical approaches for the treatment of endometriosis include:

Laser ablation or excision: Laser surgery is a very precise technique, which is capable of accessing difficult areas, and produces less damage to the surrounding tissues. The laser seals off the blood vessels and thus minimizes the bleeding.

Electrocoagulation or diathermy: Electrical heat is used to destroy and remove endometriosis, and as well control bleeding.

Excision Surgery: This technique involves cutting out endometriosis with the help of sharp objects or lasers.

CUSA (Cavitron Ultrasonic Surgical Aspirator): This is a device with an ultrasonic vibration tip, which destroys endometriosis tissue and the aspirator attached next to it sucks the tissue debris.

Surgical procedures performed using the above techniques are:

Conservative Surgery: This type of surgery is considered if the symptoms are severe and if the patient wants to avoid any damage to the reproductive organs such as the uterus or ovaries so that fertility remains unaffected. Laparoscopic surgery also known as keyhole surgery is used more often. With a procedure called excision, the surgeon will cut and remove endometriosis. Another method used to destroy endometriosis is the application of heat or a laser beam.

Complex Surgery: If the symptoms of endometriosis are severe, surgical procedures involving other organs such as the bowel, urinary bladder, cervix, and vagina are considered. This is more complex compared to other types of surgery. This procedure is usually carried out using the laparoscopic technique.

Radical Surgery: If the patient does not respond well to drugs or minimally-invasive surgery, and does not want to bear children in the future, radical surgery can be considered.

Hysterectomy: In this method, the entire uterus or a part of the uterus is removed, and this surgical procedure is performed under general anesthesia. This procedure can be done with or without the removal of the ovaries. This procedure is irreversible and the patients who undergo hysterectomy will never be able to bear children.

Types of hysterectomy are:

Oopherectomy: This procedure involves the removal of the ovaries.

Other surgical procedures to treat endometriosis-associated with ovaries (endometrioma) are:

Puncturing the cyst: In this procedure, the cyst is punctured in order to drain the fluid out.

Ablation: In this surgical approach, after a puncture is made to the cyst, the fluid is drained, and its base is removed with laser or electrosurgery. Care is taken to make sure that the ovary is not damaged.

Removal of cyst wall: In this procedure, a small portion of the cyst wall is removed; the possibility of recurrence of endometriosis is very less. This procedure can damage the outer layer of the ovary that contains the eggs.

Drugs and Other Treatment Needed for Endometriosis

Nonsteroidal anti-inflammatory drugs (NSAIDs) are commonly used to relieve pain and menstrual cramps. Interruption of the production of the normal cyclical hormone by the ovaries helps in the treatment of endometriosis. These medications change the hormonal levels in the body. These are usually given orally, as injections, or through an intra-uterine device.

Endometriosis is generally classified into the following types or stages:

The stage of endometriosis depends on the factors such as the location of lesions, their number, size, and the depth of the endometrial implant. 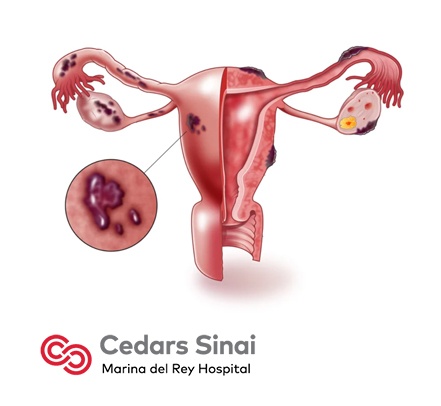 The pain associated with the severity of the symptoms might not always be proportional. It is possible that minimal endometriosis gives agonizing pain or very little pain, and severe endometriosis can at times result in less pain. The most common symptoms of endometriosis include the following:

Diagnostic Tests: Most often, the symptoms of endometriosis look similar to other pelvic disorders, and an accurate diagnosis has to be done.

Patient history: A detailed health assessment of the patient and family history will be done.

Physical examination: The doctor will manually feel the abdomen for cysts or scars around the uterus. However, this will not be very effective in getting a clear diagnosis.

Ultrasound: In this procedure, sound waves from a transvaginal ultrasound or abdominal ultrasound device are moved over the abdomen or inside the vagina to get the image of the uterus, the size of the endometriosis, the number of lesions, and its locations in and around the uterus.

Magnetic resonance imaging (MRI): This imaging test will reveal the size, number, and location of endometriosis.

Hysteroscopy: A telescopic instrument called a hysteroscope is inserted through the vagina and cervix into the uterus. With the help of light and other mechanical devices, the uterine wall is examined along with the fallopian tubes.

The risk factors associated with the increased chance of developing endometriosis include:

Other factors that can influence this disorder are:

Age: Endometriosis occurs more often in women between 25 to 40 years of age.

Diet: Eating a diet rich in red meat and trans fats may increase your risk of developing endometriosis.

Heredity: Having a family member, such as a sister, mother, or aunt with endometriosis.

Menstrual History: Having a history of menstruation disorders, shorter or longer than normal cycles, and heavy menstrual bleeding.

Embryonic cell growth: When the embryonic cells that line the abdominal and pelvic cavities can grow into endometrial tissue, endometriosis can develop.

Surgical scar: After surgical procedures such as removal of the uterus or C-section, endometrial cells can adhere to the surgical incision causing endometriosis.

Excess exposure to hormones: Prolonged exposure to estrogen leads to the development of endometriosis.

Genetic changes: Change in the genetic structure due to radiation can cause this problem.

Alternative Medicine and Treatment for Endometriosis

Natural alternatives for the treatment of endometriosis are:

Progesterone cream: This cream is applied to control the stimulus of estrogen thus causing hindrance for the creation of endometriosis.

Herbal treatment: Herbs such as dandelion, vitex, and evening primrose are given in the form of herbal teas, tinctures, essential oils, or compressors. These help in alleviating pain and shedding endometriosis tissues held in the uterus and pelvic organs.

Some women have found relief from acupuncture treatment and this is not confirmed through research yet.

How to Prevent Endometriosis

Diet: Reduce the intake of red meat, excess alcohol, and caffeinated drinks, because they increase the estrogen level in your body. Consume lots of green vegetables, dairy products such as milk, cheese, and green tea regularly. Eat foods rich in vitamin D and get adequate exposure to sunlight.

Are you suffering from irregular periods, heavy menstrual bleed, or pelvic discomfort? For any questions, information, or guidance related to endometriosis, consult our specialty-trained, skilled gynecologists at Cedars-Sinai Marina del Rey Hospital.