Get Treatment For GERD

At Cedars-Sinai Marina del Rey Hospital, our well-trained and experienced gastroenterologists provide patients with a wide range of innovative and effective methods to diagnose and treat GERD. Upon diagnosing the patient’s condition our specialists choose the best treatment options in order to alleviate their symptoms and underlying conditions.

Gastroesophageal reflux disease, also called GERD or acid reflux, is a common digestive condition. Symptoms include breathing problems, pain in the chest area, heartburn, a bad taste in your mouth, and even vomiting. These symptoms happen when the contents of your stomach, mainly food and gastric acid, flow up into your esophagus and irritate its lining due to a malfunction of the lower esophageal sphincter (LES). A healthy LES opens up, in order to permit the ingestion of food, and closes after that, so that the food and other stomach contents remain inside the stomach. A deficient LES fails to close, allowing for the stomach’s contents to flow back up.

Acid reflux is a common syndrome that affects more than 30% of the population. In most cases, acid reflux is not a severe condition, but when it becomes frequent it can disturb the day-to-day activities. If acid reflux visibly damages the lining of your esophagus, doctors may diagnose you with GERD.

Although gastroesophageal reflux is a condition that can generally be resolved with medications, there are instances when the doctors might recommend surgery. Surgery becomes an option for GERD when medications are ineffective, or when the patient is unable to take the required medications. There are two procedures that can treat GERD:

Drugs and Other Treatments Needed for GERD

Before deciding to treat GERD surgically, people generally opt for easier and less invasive treatment methods, such as different types of medications. When treating GERD, most people usually start by taking over-the-counter medications to control their acid reflux. If this type of medication is not effective, the doctors prescribe different combinations of medication or even surgery.

Some of the most common medication treatments for GERD are:

Implementation of a LINX device »

There are two different types of GERD: 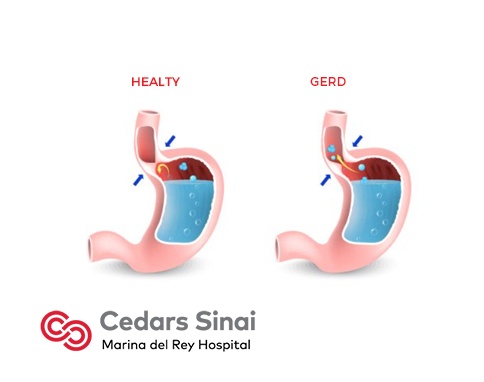 Some of the most common symptoms associated with GERD include:

Although GERD is a common condition and its symptoms may not always indicate an underlying condition, heartburn or pressure in the chest area should never be ignored, especially when accompanied by symptoms such as arm pain or shortness of breath, as they can precede a heart attack.

It is also strongly recommended to see a doctor when any of the symptoms mentioned above persist and cannot be alleviated with over-the-counter medications.

Gastroesophageal reflux disease can be diagnosed by doing one or more of the following procedures:

Risk Factors and Causes of GERD

There are certain factors that increase a person's risk to develop GERD, such as:

One of the main causes of GERD is recurrent and persistent acid and bile reflux into the esophagus. The constant presence of acid in the esophagus irritates its mucosa, thus, causing esophagitis. If not properly addressed, this affection can have serious consequences, such as Barrett’s esophagus, bleeding, or narrowing of the esophagus.

Other causes of developing GERD are:

Alternative Medicine and Treatments for GERD

The symptoms associated with GERD, such as acid reflux or heartburn, can be alleviated by using alternative medicine and treatments. However, these treatments have not been scientifically confirmed to work, and they might be harmful in certain situations, so it is strongly recommended that you ask your doctor for advice before trying any of them.

Some of the most popular alternative treatments for GERD are:

How to Prevent GERD

Some of the most efficient preventive measures for GERD and its symptoms consist of certain changes in lifestyle, such as: quitting smoking, losing any extra weight, avoiding tight clothing, sleeping with your head elevated, and avoiding carbonated drinks.

Another efficient way to prevent GERD is to seek medical advice when confronted with symptoms that might indicate the presence of this condition. The doctor can then prescribe medications that can prevent these symptoms from evolving into a severe condition.

Are you suffering from gastroesophageal reflux disease? For any questions, information, or guidance related to GERD treatment, get in touch with our specialty-trained, skilled gastroenterologists at Cedars-Sinai Marina del Rey Hospital.