The Importance of Screening for Cervical Cancer 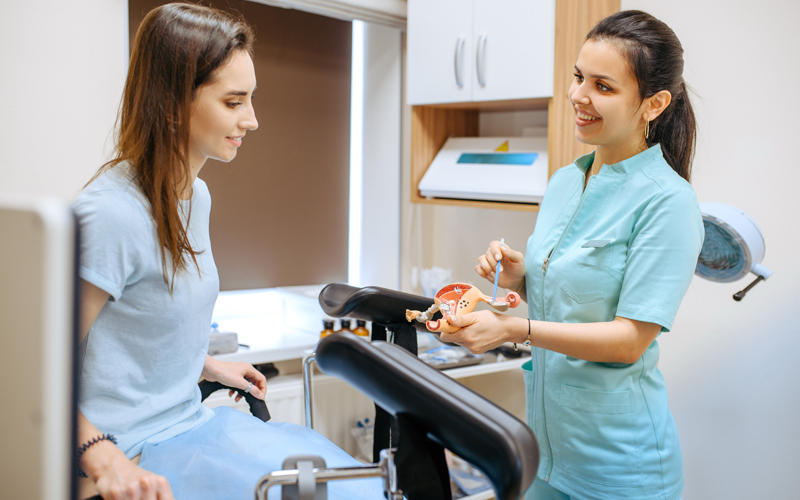 According to the American Cancer Society, by the end of 2021, approximately 14,480 cases of cervical cancer will have been diagnosed in women across the United States. Cervical cancer is the fourth most common malignant disease in women, after breast cancer, lung cancer, and colorectal cancer. 1 in 125 women in America will develop cervical cancer at some point during their lifetime.

The 5-year survival rate if cervical cancer is found in advanced stages ranges between 50% and 20%, which makes this disease very dangerous and life-threatening. Fortunately, unlike the case of numerous malignant diseases, there is a screening test for cervical cancer that women at risk should regularly undergo to timely detect it in the regrettable event they develop it.

Who Is at Risk for Cervical Cancer?

Women between 35 and 44 have the highest risk of receiving a cervical cancer diagnosis. However, the average diagnosis age is 50. Cervical cancer rarely develops in women under 20. The chances of coming to struggle with this disease increase as you age. Unfortunately, women over the age of 65 with cervical cancer were found to have a considerably higher risk of losing their lives to the disease than younger women.

What Screening Test Is Available for Cervical Cancer?

The only screening test available for the detection of cervical cancer is the Pap smear, which can identify abnormal cells in the cervix before they become malignant. For this reason, the Pap smear can be lifesaving, as it is also very accurate and easy to perform. Some healthcare providers offer to test for HPV during a Pap smear as well to determine whether the woman has this risk factor for cervical cancer.

It is worthy of mentioning that there is a major difference between a pelvic exam and a Pap smear. During a pelvic exam, the medical professional only examines and feels the ovaries, uterus, and other parts of the female reproductive system, which cannot detect cervical cancer. On the other hand, during a Pap smear, a sample of cells from your cervix is collected by the healthcare provider with the aid of a small brush and a tiny plastic spatula.

The sample of cells will subsequently be sent to a laboratory, where they will be examined by a pathologist to see whether they are healthy or abnormal. You will receive the results of your Pap smear within 1 to 3 weeks. Another noteworthy aspect is that a Pap smear is a painless test, but you may feel a little discomfort, particularly when you have your first screening performed. Some women say that a Pap smear feels like a small pinch. Nevertheless, everybody is different in terms of pain threshold.

How Often Should Women Undergo a Pap Smear?

Multiple factors play a crucial role when it comes to how often a woman should have a Pap smear done, such as age and health. As a general rule, women should begin undergoing Pap smears when they are 21 and the additional HPV test after 30. The vast majority of women over 65 do not need to undergo Pap smears anymore. Your doctor may recommend you to get a Pap smear as follows:

Many women wonder if they still need to undergo Pap smears if they had a hysterectomy. If only your uterus was removed during the surgery, you will have to continue getting Pap smears, as you still have your cervix. Nonetheless, if you had a complete hysterectomy for a non-malignant health problem, you will no longer have to undergo Pap smears. Lastly, if you had a hysterectomy for cancer, your healthcare provider may advise you to keep undergoing Pap smears for the early detection of a potential cancer recurrence.

Preparing for a Pap Smear

To obtain the most accurate results after a Pap smear, you will have to prepare yourself several days in advance before undergoing the test. This refers to the following:

After you undergo the Pap smear, you can go on with your day as usual. You may experience some light spotting afterward, but this is not always the case.

Contrary to popular belief, receiving abnormal Pap smear results does not necessarily mean you have cervical cancer. There are numerous situations in which your Pap smear can show abnormal results, such as when it detects the following cells:

If your Pap smear results are abnormal, your doctor may perform a procedure medically known as a colposcopy by using a magnifying instrument to examine the tissues of your vagina, cervix, and vulva. They may also collect samples of tissue from areas of your reproductive system that seem abnormal so that the pathologist can analyze them.

Undergoing a Pap smear as advised by your doctor is extremely important, as it can find cancer before it even develops. Cervical cancer kills more than 4,000 women every year in the United States. By virtue of the Pap smear, which was invented in the 1920s, the number of women who come to struggle with this unmerciful disease has significantly decreased, and we encourage you to never postpone or cancel your Pap smear testing, especially if you have one or more risk factors in your life.